During the first half of 2009, commodities strategies trailed only fixed-income and emerging-market equity strategies for total asset growth. This is noteworthy as it seems to indicate that investors have finally accepted commodities as an institutional-grade asset class.

Some pundits might argue that the increased fund flow is a product of recent commodity price spikes, such as gold’s current price of more than $1,100 an ounce. However, BHA’s conversations with investors suggest that the answer lies in commodities natural position as a hedge against inflation and beta.

During the past 18 months, governments worldwide have pumped billions in stimulus into their economies to avoid a depression. As economies begin to turn around, many investors expect inflation to follow as money that has been sitting on the sidelines floods the market for goods and services. As a result, investors are allocating to commodities funds hoping to benefit as prices increase in response to a drop in the value of the U.S. dollar.

Investors are also interested in commodities as a hedge against beta. In terms of finance and investing, beta measures the correlation between the expected return of a stock or portfolio and the return of the financial market as a whole. Here, too, commodities traditionally have had an inverse relationship—a relationship that appears to strengthen during periods of greater volatility. As shown in the figure below, during a five-year period from 2002 to 2007, the Dow Jones-AIG Commodity Index is uncorrelated to the S&P 500. 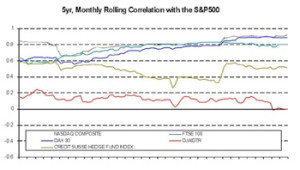 As the dollar rises, equities generally decline; as the dollar falls, equities generally increase. Unsure which way the market will head in 2010, coupled with fears of medium- to long-term sustained inflation, many investors are hedging their bets with an investment in commodities. In a recent discussion with a nonprofit employee pension fund, the alternative research manager suggested that near-term tactical allocations will be to energy-based, value-added private equity funds in an effort to gain access to the underlying commodity as an inflation and beta hedge.

It is hard to predict whether commodities will continue to gain traction as an institutional investment. However, diversification has been a consistent theme among investors and commodities provide an alternative path.